The Clash of the Giants 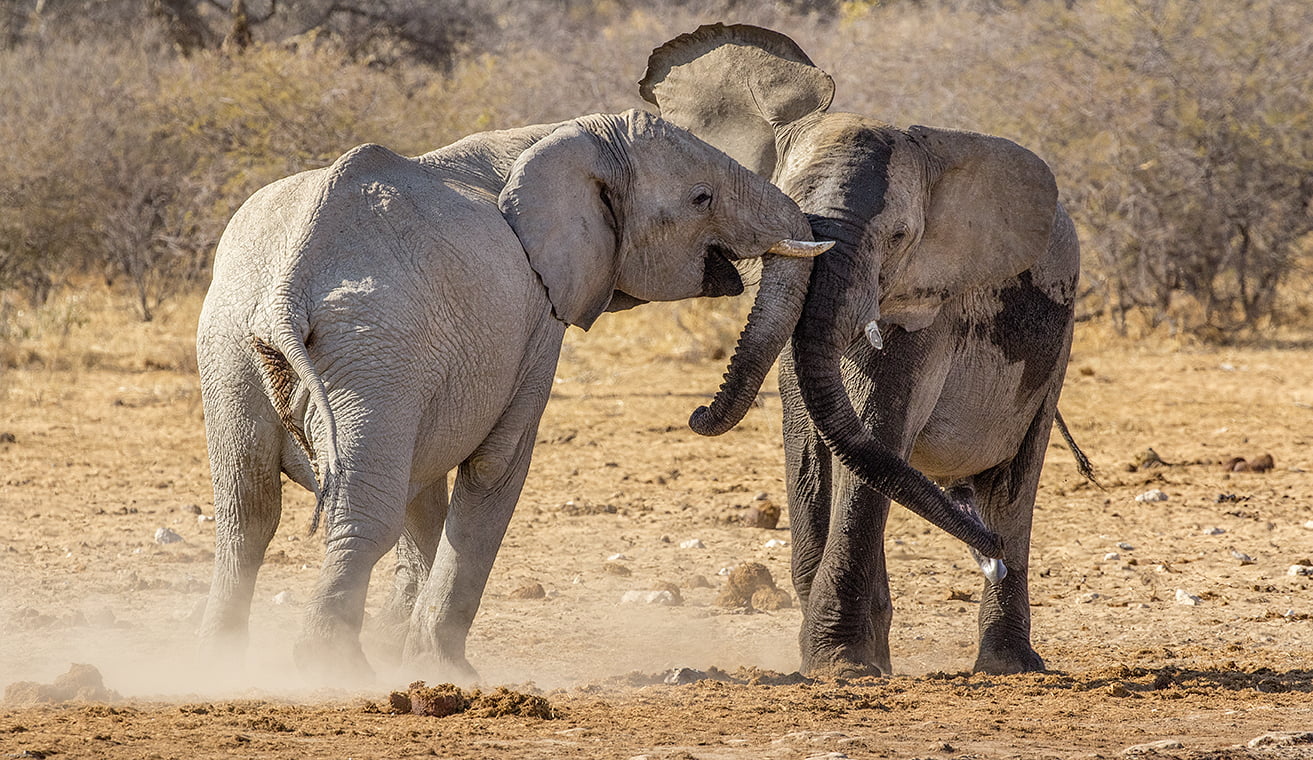 The Clash of the Giants

You’ll always see wildlife but where and when, well that’s always a mystery is it not.

On this day while blazing the trail in Namibia with my photographic Tour group that I was running we came to a water hole in Etoshia National Park. A large part of our stay was observing at water hole where a family of Elephants were just drinking and going about their normal business when all of a sudden, one elephant decided to exercise his grunt. It was a clashing of bodies; bone crunching stuff and thumps that echoed throughout the surrounding land and that left you in awe. 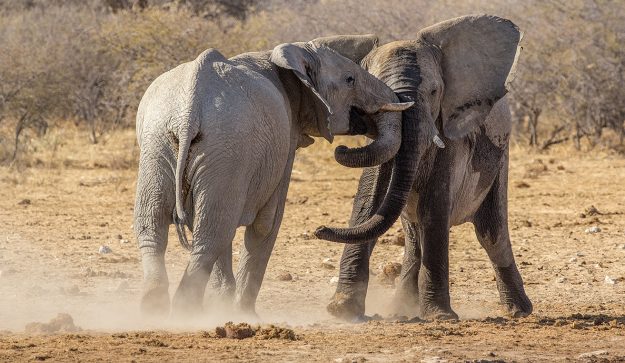 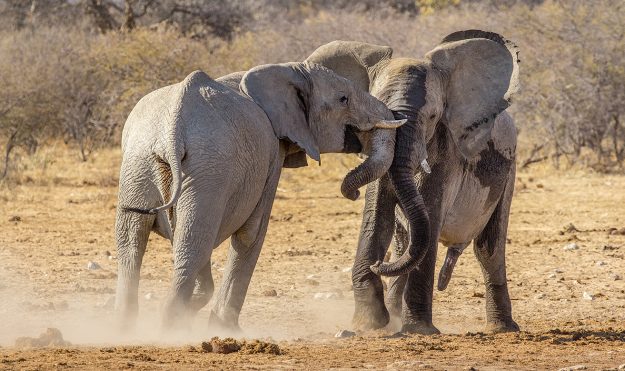 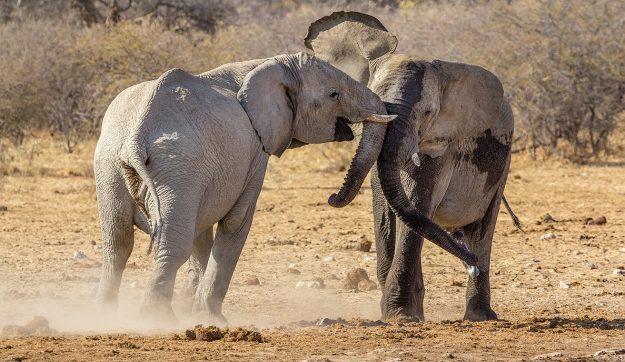 I’ll never forget the crunching as they smashed into each other.

I think these elephants would have woken up the next morning with massive headaches.

The camera’s were being fired at 10 frames a second. As the group was firing off their cameras I was guiding them on what shutter speeds to use if they wanted to freeze the action. ( If you ever do Africa, then having a camera that will shoot at 10 frames a second is a massive plus and a must in my eyes. What I was shooting with in Africa and I think it is the perfect combination for wildlife is Canon’s 7D mark2 , that’s 10 frames per second. i also had the 100mm-400m 5.6. When you put this lens on a half frame sensor as the 7 D mark 2 is, that 400mm becomes almost 750mm. That’s awesome and the results are stunning.What I love about this combination of camera and lens, it is reasonably light compared to the massive lens that some use which you need to sell your house to be able to own it) 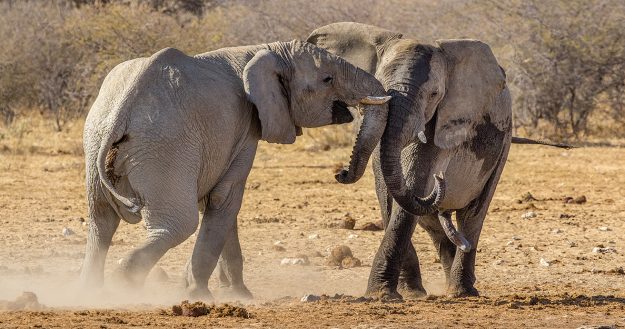 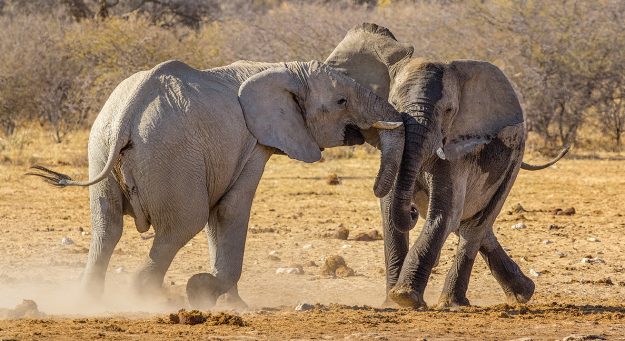 As I was shooting this amazing show of strength it occurred to me that nothing has really changed has it. These elephants were fighting over a lady, to claim right to her and the strongest elephant was to be the victor and she was his trophy.

The loser also not only paid the price of not mating with the “ love of his life” but he was then banished from the group. 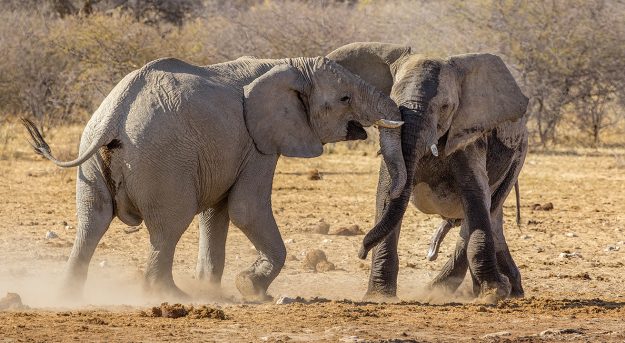 Nothing has changed has it? In the human world guys are always pushing there weight around to fight for the right to be with the woman. Why??? As you grow older, you get to the point where you just gotta let it go. At the end of the day, if she doesn’t love you , then guys you just have to accept that. Yes it hurts but remember, if she dumps you, then she never love you the way you loved her and as much as it hurts you have to just accept it.

I think there is something very wrong with us males the way we carry on at times but that’s another story. The out come here with the elephant that losers has grave implications for him. What also went through my mind, that in all the 4 legged animals in Africa, this event is played out all the time, everyday and around the clock. There is always an animal fighting for his mate to be able to mate with her.

Africa is so fascinating, so enchanting and so emotive. 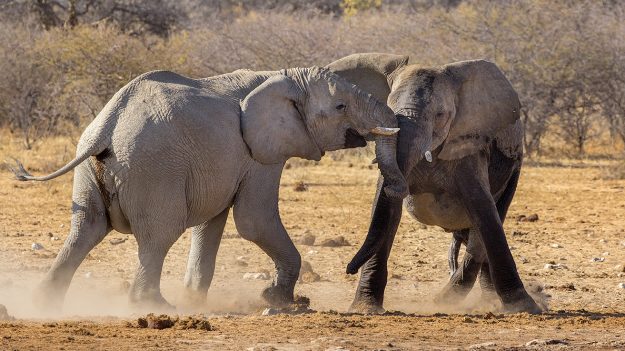 You’ll also notice that in some of the shots, one of the elephants has his penis hanging low Clearly on of these elephants was in the mood for some hanky panky  and how tough would it be , that you are ready for ” sex” and now you are fighting for the right to have it. What a contrast as they say.

When they are fully on fire, the elephants penis drags on the ground, that’s how massive they are and we were told by our guide that the weight of an elephants penis is 27 Kilos. Now that’s some food for thought!! 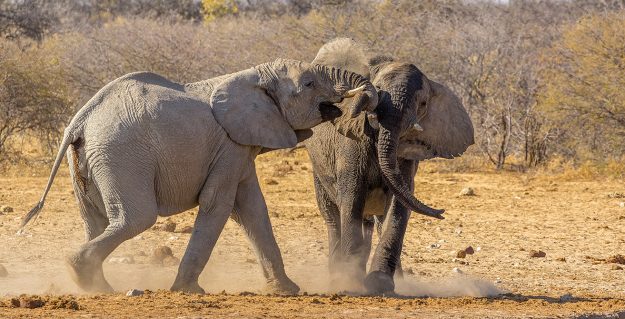 When you get to see this at close range, you can’t but be in awe of Africa. Pete:)