Think Outside The Square

Think Outside The Square 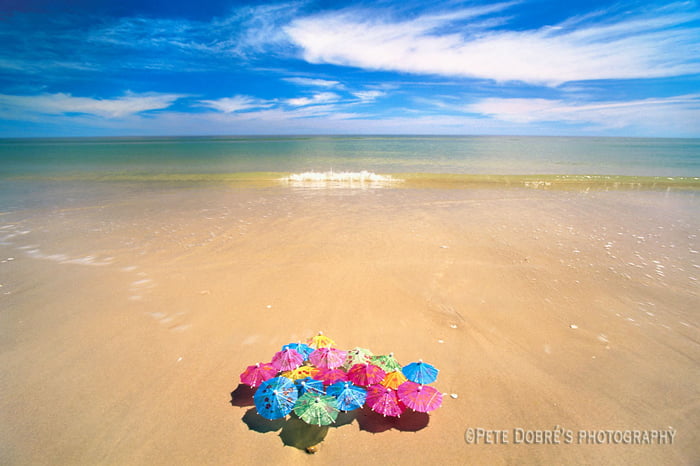 Think outside the square. I share the next two pics with you as this fits in with this little topic. Some years ago Canon ran a competition, it was the first in a series  that they ran.

There two sections,Professionals and Non Professionals. Canon gave you a box and their were five items in the box and you had to go and shoot a image as creative as you could featuring either one of all five items or you could shoot all five in separate images.

I concentrated on the martini umbrellas as they were in the box. I’m not sure of their proper name as I don’t drink alcohol at all and I may be showing my lack of knowledge here.

I had a concept in mind and it was as what you see in these pictures. As soon as I received my box and I opened it and looked inside , the umbrellas just grabbed me straight away.

There was a closing of date of the comp closed and it took me 6 weeks to shoot these two shots. Why 6 weeks??? For those who know the crazy guy called Pete Dobré, you’ll know that he loves awesomeskies and has done so ever since as a kid.

Even in his darkest times growing up as a child where he witnessed first hand the abuse of alcohol and the destruction that caused, he would always look skyward and found a delight in the skies above him and joy that wasn’t to be equaled during those years. The skies were his pocket of joy in a  very dark time.

I waited 6 weeks before I had the skies that I was looking for in these pictures. These pictures were taken on Velvia, 35mm film, rated at ISO 25.  When I saw the skies in the far distance, I had to get into the car and drive  to the beach to set up. Well setting up was hard.

In the box you had 5 umbrellas  and how long do you think it took before they were destroyed? Within a few minutes as the tide would surge in and wipe them out, I would then have to make a run to the water so they wouldn’t get sucked into the ocean.

I could see the skies drawing closer, so it was in the car, to the closest supermarket and I bought a whole packet. By memory I think there were about 100 in the packet. I may have that number wrong but there were stacks!!!!

It took over an hour to get the shot, went through many umbrellas and off course when they were wiped out, as before I had to chase them as they were getting sucked into the sea and I didn’t want to pollute the ocean.

As I had completed my assignment, I was totally stuffed. I then had to get it processed which i did. Next day the comp was closing. I then had to scan the images and at the time I had a Nikon Cool scanner and it was playing up.It just wouldn’t scan.

After a number of hours of scanning  and things not working. I made  a dash into the city to my scanning house, with only a very short time of business hours left in the day, they kindly scanned the two images.I went home to send the images which normally would have been fine.

My internet was not working or not  wanting to talk to Canon in Sydney and it kept crashing all the time.

11.45pm, things were not looking good.I was so stuffed in trying.

I won the comp, first prize at the time was a Canon 5d mark 2 and the external flash.

I’m not saying my pics were better than the others, but the judges thought they were for reasons that were only known to them. I do understand that photographic judging is subjective but it is nice to be on the end of being chosen as the winner in that section.

We are losing that ability to see, think, ponder and reflect how best to shoot the shot. The digital age has taught people to go bang bang  and bang. That’s another story.

It was a lot of fun to do. I love it, was so much fun. Think out of the square. look for a new angle to your pictures.

The awesome thing to come out of that day when shooting the umbrellas was as I was almost finished, these 5 massive lads came towards me, they looked scary, had attitude etc. They stopped and I chatted with them as I do with anyone and explained what I was doing. They kept looking at the umbrellas. I asked them would you like the rest of them, I have finished with them. They were over the moon with that. They thanked me, and it was like I had given them the best gift ever. It wasn’t an iPod, iPad, laptop, nothing electronic, but a series of cheap colorful umbrellas. How lovely was that. That made my day for them to be delighted with that.

You can’t judge a book by its cover can you?. Underneath the exterior, their personalities shone  through and their leader gave me a warm hand shake as they left and they were just so happy and delighted.Chuckles and laughter were heard as they made there way down the beach.

I’ve often said, the simple things in life are often the most rewarding and I still believe that today. Simple is emotive, strong and rewarding.

The next time you are about to take a picture, think outside the square and see what transpires. It is always nice to be given a challenge when taking a picture. Just when you think you know it all, there is always something new to learn. That’s life is it not? 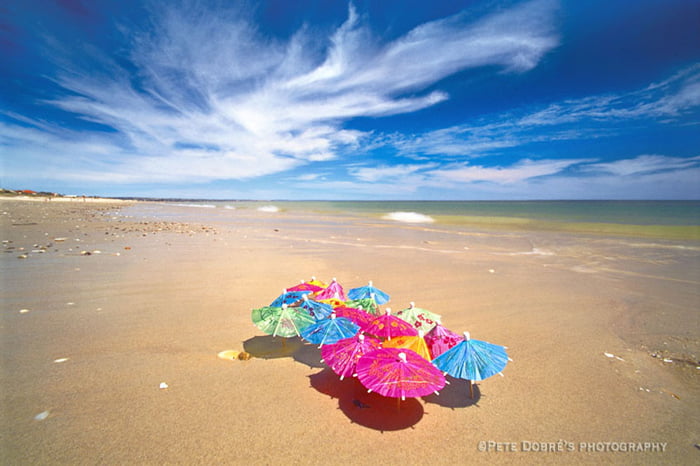