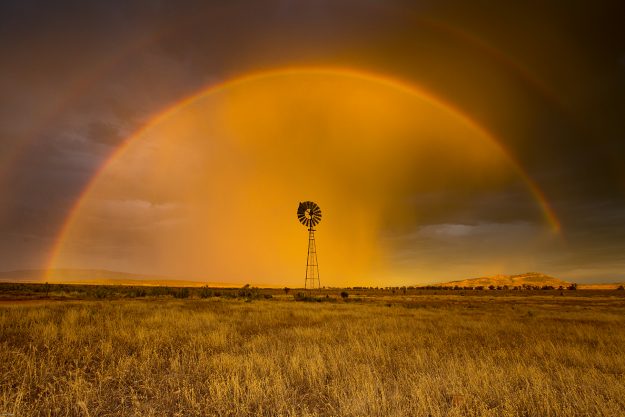 There are moments that are ever so hard to put into words. This is one of them. I’m up in the Flinders Ranges as I was commissioned to produce a short film Documentary and being in January as you can expect, it’s so hot .We had a limited window of filming as it had been reduced due to the threat of rain which was predicted to come this way. So we had to keep working until the project was completed.

With the heat, you will normally get some drama in the sky. Well this morning I literally fell out of bed, into my clothes and raced out for sunrise. I thought I was going to miss it as I had slept in. I didn’t sleep too well on the night and my back up alarm didn’t go off and I woke up at 6am.

It was just so hot, stinking hot at 6am. They had predicted massive storms up here and this is my last day of filming due to the weather.

I arrived at my sunset spot and the wind was howling and it was a north wind. For my over seas friends this is a hot wind in Australia. The wind from the north comes from the hot interior of Australia and in summer, that region is extremely hot.

I quickly got myself set up once I had arrived and I was hoping for a burning sky against the windmill. It was evident that the sun wasn’t going to light the windmill up so I decide to go behind it and shoot into the sunrise and this would give me a awesome silhouette of the windmill against a burning sky, should happen. Well that didn’t happen and it always pays to keep looking around.

I had a light shower of rain fall on me but I wasn’t moving, I was determined to hold my ground for a while. It soon stop, a little wet but it was so hot, did it really matter?

As the rain began to fall I looked behind me and I could see a small storm cell coming my way, the colours were grey the rain band looked impressive (as I felt some of it) but not enough for me to run to the other side of the windmill.

After another 5 minutes I looked behind me again and I was so humbled, tears ran down my face, as I know God was speaking to me through this incredible scene. (That’s another story for an other day) I was so over come with emotion that I just stood there for a moment and then I knew I had to get my legs moving to get to the other side. 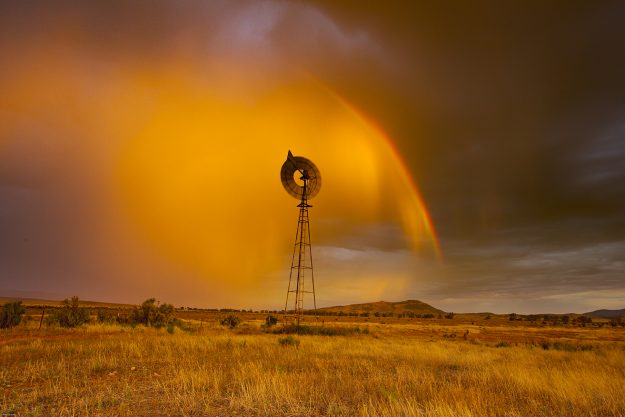 I managed 8 shots before the heavens opened up big time. I stood there, with my camera under my red shirt as the rain fell. I thank God for the gift that I was given this morning, as it was a gift that lasted only for about 90 seconds and it was all gone.

The brightness and intensity was stunning and the capture really didn’t do justice to what was before me. It was so powerful. So emotive that one couldn’t help be moved.

The glow was within the rainbow, and it was like the Rainbow was weeping. Tears of joy and forgiveness. Why do I say this and this won’t be everyone’s take on this but this is my worldview, it is how I see it.

In the old book God sent the rainbow as a sign that he would never wipe out the earth with a flood. I see the rainbow as an act of forgiveness and as an act of redemption and when I’m on my own and I’m given a rainbow, I’m always moved as I’m chatting away to Him all time when I’m out in the wide open spaces. For me that is my church, that is my communion with Him, not in 4 walls but I’m not saying that not valid for those who go to the traditional church, but for Pete, my church is with Him in the middle of nowhere, surrounded by His awesome acts of creativity. It will always be that way for me. So while out there having chats with God I’m hit with this. I see the rainbow as my own act of forgiveness from Him and my own redemption for the things I get wrong and stuff up in life. That’s another story.

You can never plan for something like this, you just have to be prepared to place yourself in situations like this to see what would happen. Remember and I stress this in all of my workshops” The shot never comes to you but rather you need to go to it”

When I left my cabin this morning, you would have never thought that this would have taken place. The signs all pointed to a no show for sunrise given how overcast it was.

For those who don’t know although its on some one my material that I have posted in my blogs in the past: my whole photographic life is based on Psalm 19:1 which states so powerfully “ The heavens declare the glory of God and the skies proclaim the work of His hands…” This has been my catch cry for over 30 years and will be until I’m taken from this earth.

For this is so true in my life and I see the sky as His canvas and every day He is painting that canvas with different colours, different brushes, different textures and so on.

We all have our own worldview and this is mine. I don’t expect others to believe it but for Pete it is a true as seeing the sun set or the sun rise.

I marvel at His creativity and as a photographer who understands where the acts of creation come from, nothing excites me more than to be given an unexpected gift. 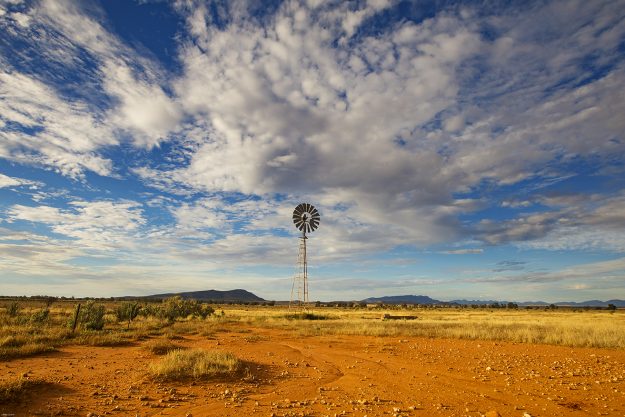 (This is the same windmill but towards sunset- This was taken the previous evening. I put this is to show you the contrast  and there is never a wrong time of the day to shoot. The most important thing to remember, is to put yourself out there to take it)

Just because I do believe in God for me it is the most natural thing to do, by no means am I better than anyone else, far from it. I have a past and in that past there are things I can’t hold my head up and I’m always trying to better myself as person. I have still, a journey to travel and that’s why I’m so humbled to be given this gift this morning. .

I have said this so many times, nature is a free gift to us all, brings so much joy to us and I’d rather be standing before this any day rather than being stuffed in a room playing video games all day.

I think the rainbow is one single act of nature that will always excite most people, why is that? Well that’s another story! Pete 🙂